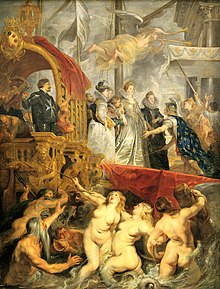 In art, a commission is the act of requesting the creation of a piece, often on behalf of another. Artwork may be commissioned by private individuals, by the government, or businesses. Commissions often resemble endorsement or sponsorship.

In classical music, ensembles often commission pieces from composers, where the ensemble secures the composer's payment from private or public organizations or donors.

Throughout history, it has been common for rulers and governments to commission public art as a means of demonstrating power and wealth, or even for specific propaganda purposes.

In ancient Rome, large architectural projects were commissioned as symbols of imperial glory. The Roman Coliseum for example, was commissioned by Emperor Vespasian. Public statuary was widespread, depicting mythical and heroic figures. The frieze that is carved into the Marcus Column, located at the Campus Martius, depicts the figure of Victory, and would have been commissioned to honour successful military campaigns waged by Marcus Aurelius.[1] Ancient Roman culture was anti-intellectual and held artists in low esteem, in contrast to ancient cultures such as the Greek[2] or Babylonian. Despite this, however, the sheer amount of surviving artworks commissioned at the height of the Roman Empire are a testament to the rulers' recognition of art's effectiveness in influencing the public's opinions about its civilization and its government.

During the Renaissance, visual art flourished in the cities of Italy due to the patronage of wealthy merchants and government officials, such as Cesare Borgia. Leonardo da Vinci earned steady commissions for artwork ranging from paintings (such as the Virgin of the Rocks for the Church of San Francisco Grande), to murals (Last Supper for the monastery church of Santa Maria della Grazia), to sculptures (the Gran Cavallo at Sforza).[3] The most famous commissioned artwork of the Renaissance may be the Sistine Chapel ceiling at the Vatican, painted by Michelangelo as a commission for Pope Julius II.

Today, public artworks may be commissioned by benefactors who wish to donate the artwork to a city as a gift to the public. "Famine" (1997), a series of sculptures by Rowan Gillespie depicting victims of the Great Famine, was commissioned by Norma Smurfit and donated to the city of Dublin, Ireland. The harrowing memorial has brought other commissions to Gillespie, who has created companion sculptures for the cities of Toronto[4] and Boston.

An art gallery or dealer who sells artworks on an artist's behalf, typically takes a percentage of the price. This portion is called the gallery's "commission". The remainder of the proceeds goes to the artist. In this way, the gallery or dealer is not only the middleman but obliquely takes the role of "patron" in that it provides representation, housing of artworks, marketing and income for the artist.

The NFL Playoffs. Each of the 4 division winners is seeded 1–4 based on their ...

美国美式足球联会西区赛会美国美式足球联会联赛国家美式橄榄球联盟运动项目美式足球成立1960 (as the American Football League ... 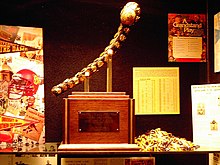